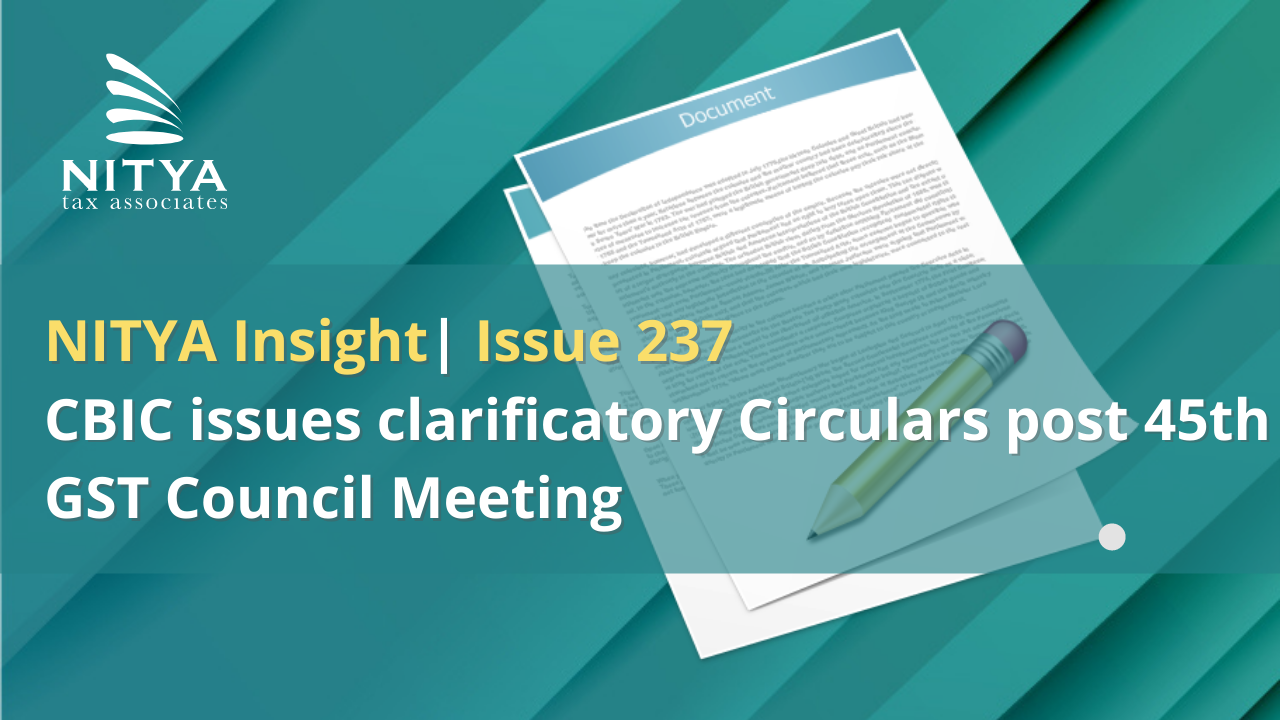 We shared our views on recommendations of GST Council in 45th GST Council (‘Council’) Meeting (update available at https://nityatax.com/changes-proposed-in-45th-gst-council-meeting). There were various issues on which Council proposed issuance of clarifications. Pursuant to that, CBIC has issued multiple Circulars on such issues. Key clarifications provided in these Circulars are discussed as under:

CBIC has issued Circular No. 159/15/2021-GST dated September 20, 2021, clarifying scope of Intermediary services and cleared air surrounding its coverage. Various pre-requisites for a person to qualify as Intermediary under GST law, have been provided along with illustrations. Such pre-requisites along with other clarifications have been tabulated as under:

This Circular is a welcome-step and clears confusion on multiple issues on coverage of various transactions under Intermediary services.

B. Input Tax Credit on Debit notes and Requirement to carry E-Invoice

On a related note, Circular proposes to revive dead claims (where Debit Notes were issued prior to amendment, ITC was not taken thereon and relevant FY for claiming ITC passed as per unamended provision). Circular has done that by providing date of availing ITC as relevant date. Under law, date of issuance of Debit Note is relevant date. Resultantly, Circular treats two set of Debit Notes issued prior to amendment differently viz. taxpayers who claimed ITC and taxpayers who did not claim ITC which is impermissible. For these reasons, Circular is incorrect. As Circular is beneficial in nature, taxpayers can take commercial call whether to claim ITC in such cases or not.

Circular 160 clarifies as under:

C. Interpretation of ‘mere establishments of a distinct person’ for export of services

CBIC has issued Circular No. 161/16/2021-GST dated September 20, 2021, on interpretation of phrase ‘merely establishment of a distinct person’ under Explanation 1 to Section 8 of the Integrated Goods and Services Tax Act, 2017 (‘IGST Act’), clarifying as under:

This Circular is in line with the Gujarat High Court ruling in the case of Linde Engineering India Private Limited v. UOI, 2020-VIL349-GUJ-ST rendered in Service Tax regime wherein the Court held that the supply of service by subsidiary company incorporated in India to its holding company incorporated outside India will not qualify as establishment of distinct person being different legal persons. Also, FAQ dated December 15, 2018, issued by CBIC, clarifies the same.